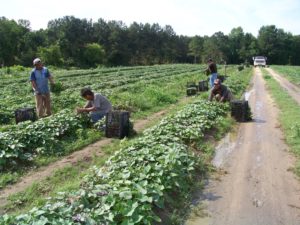 The vast majority of the $75,000 settlement will be paid in damages to Legal Aid’s clients: Mexican citizens lured into crippling debt for the opportunity to come to North Carolina in 2015 with promises of a legal work visa that would provide them with abundant work, ample pay, and the chance to extend their stay in the U.S. at the end of their visa period.

In their August 2017 complaint against the Stantonsburg contractors, Lori Johnson, managing attorney of the Farmworker Unit, and supervising attorney Caitlin Ryland described a very different reality for their clients than the lucrative job opportunity that they were promised in their hometowns in Mexico.

The complaint alleges that before the workers arrived in North Carolina, Cirila had been operating as a farm labor contractor for years, but her business was in trouble. Facing financial difficulties and weathering multiple state and federal investigations, she was potentially on the verge of losing her certification as a farm labor contractor. So, she turned to her daughter Marisa, who was working as a paralegal in a Greenville law firm at the time. Acting as a front for her mother, Marisa submitted the various applications required to hire workers through the H-2A program. Marisa held herself out to the feds as the sole contractor, when in reality, her mother and stepbrother acted as the on-site farm labor contractors.

The workers allege that, in 2015, the Garcias charged them exorbitant and unlawful recruitment fees, which are expressly prohibited by the H-2A program; paid them less than the $7.25 per hour minimum wage and the required $10.32 per hour H-2A wage for their work in the tobacco and sweet potato fields; lied to them about their chances of staying in the U.S.; failed to reimburse the workers’ upfront visa and travel-related expenses to come from Mexico to North Carolina; housed them in substandard housing; deprived them of workers’ compensation coverage, which they are entitled to under H-2A rules; impeded their access to medical care; retained their Social Security cards; used threats and coercive action to try to confiscate their passports; and made a loud, public display of physically threatening another worker who dared to ask for his wages.

“Our clients wanted justice, and we are glad that we were able to win some measure of it for them.” Johnson said.

The complaint alleged that, taken together, the contractors’ actions violated multiple state and federal laws, including the North Carolina Wage and Hour Act, the federal Fair Labor Standards Act and Trafficking Victims Protection Act, and the rules of the H-2A program.

“This is what labor trafficking looks like,” Ryland, a member of North Carolina’s Human Trafficking Commission, said. “Sex trafficking might be better known, but labor trafficking is just as pernicious and it’s all too prevalent, especially in industries where labor contracting services are used.”

“North Carolina’s agricultural industry is one of the largest users of the H-2A program,” Johnson said. “H-2A workers are particularly vulnerable, despite the protections guaranteed to them by the program. They are often recruited from parts of the world with fewer economic opportunities, rarely speak English, typically are unaware of their legal rights, and they depend on their employers for nearly everything: housing, mail, access to food, medical care, houses of worship, information … almost everything. With their visas tethered to one employer, the H-2A worker can’t just leave and work lawfully for a different employer. There are always individuals out there who are willing to exploit these vulnerabilities for their own gain.”

Under the settlement, the three contractors deny all liability, but agree to the financial settlement and other terms, including a lifelong ban from participating in the H-2A program. This was a moot point for Cirila Garcia-Pineda, whom the U.S. Department of Labor added to its list of Ineligible Farm Labor Contractors in 2017, which prohibits her from engaging in any activity as a farm labor contractor, whether under the H-2A program or not.

For Marisa Garcia-Pineda, her agreement to the life-long H-2A ban comes on top of a three-year ban – issued by the U.S. Department of Labor in 2018 – on acting as a farm labor contractor outside of the H-2A program.

Ryland remarked, “I am honored to have had the opportunity to represent this group of workers who bravely stood up in solidarity against those that wronged them. Our clients hope that this settlement will help them and their families move forward from this experience and that shedding light on what happened will protect others vulnerable to the same exploitation.”