A common, dangerous, and unreported issue that farmworkers face in the fields is exposure to pesticides.

Pesticide exposure is dangerous because it can result in short-term and long-term health issues. Some of the long-term effects of pesticide poisoning include cancer, memory loss, blindness, sterility, and birth defects.

This year, I had the privilege of working on one of many of the pesticide related cases that our office has taken. In this case, a group of Bladen County farmworkers reported that a tobacco suckering agent was being sprayed while they were topping tobacco in the same field. The workers were very worried about the effects that this reoccurring practice could have on their health.

Using their phones, some of the workers documented evidence of the spraying by snapping photographs as it occurred. 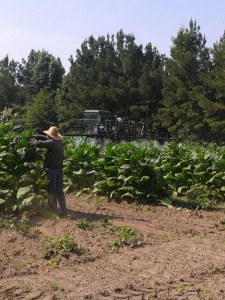 We assisted the workers, filing a formal pesticide complaint to the North Carolina Department of Agriculture (NCDOA).

When the NCDOA investigated, the employer admitted that the sucker control agent, Royaltac-M, was indeed sprayed while workers remained in the field. The NCDOA concluded that the employer, among other violations, used the pesticide in a manner inconsistent with its labeling.

While the employer denied that he willfully violated the law, he agreed to pay a $1200.00 fine. In addition, the North Carolina Department of Labor further cited the employer for failure to provide adequate water for the workers and failure to disclose hazards in the workplace.

This case is a good example of how the courage of this group of workers resulted in the protection of all of their coworkers and future workers of this farm. Fines and citations encourage growers to comply with the law and in the process, to protect the health of their workers.

If you know of any cases of pesticide exposure, call our office at (800) 777-5869 so that we can continue to help protect farmworkers whose health is threatened by exposure to these dangerous pesticides.