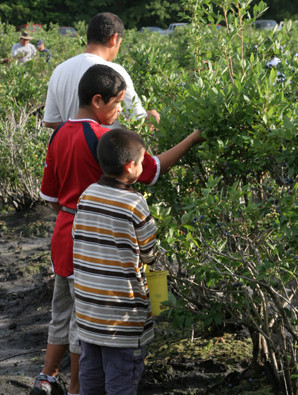 Two of these exclusions remain absolute — overtime pay and collective bargaining rights.  The federal Fair Labor Standards Act still excludes agricultural workers from its overtime pay requirements, so no matter how many hours a farmworker works in a week, he or she is not required to be paid overtime (11).  The National Labor Relations Act, the federal law which sets out a structure and a process for collective bargaining, also still does not cover agricultural workers (12).

Other exclusions have been trimmed over time and those laws now cover at least some agricultural workers.  Still, farmworkers have significantly fewer or weaker protections than other workers:

The Fair Labor Standards Act generally does not allow the employment of minors under the age of 16, and those under 18 cannot be employed in any occupation found to be particularly hazardous for minors or detrimental to their health or well-being (16).

Workers Compensation
Workers compensation is a system of insurance, mandated by state law, that provides free medical treatment for injuries or illnesses arising in the workplace.  A worker who loses more than a week of work due to the injury can also receive two-thirds of his or her average weekly wage for each week until he or she is cleared by the doctor to return to work.  From its inception In the early 20th century, in North Carolina, almost all farmworkers were not covered by workers compensation.