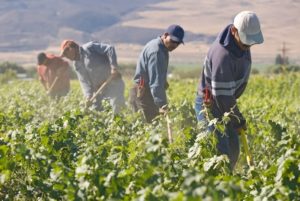 The 8 workers allege that the defendants violated the Fair Labor Standards Act, the North Carolina Wage and Hour Act, North Carolina Retaliatory Employment Discrimination law, and North Carolina contract law when they forced the workers and their coworkers to kick back a substantial portion of their wages from their weekly paychecks to the defendants, beginning at least as early as 2015 and continuing up to and through the 2018 harvest season.

Specifically, the workers allege that they were required, as a term and condition of their employment for defendants, to kick back often as much as half their wages from paychecks to Defendants, and, if they kicked back what Defendants deemed to be an insufficient amount from a paycheck and/or protested or complained about the kickbacks, or compulsory payments, they were retaliated against by Defendants.  Workers estimate that they kicked back up to or almost half their wages each year to Defendants, in the years spanning from 2015 through 2018.

The 8 workers intend to seek certification from the court allowing them to represent a collective action, covering all similarly-situated workers that choose to “opt in” to, or join in, the collective action.  For more information please contact Aaron Jacobson, at 919.856.2180, or by email: AaronJ@legalaidnc.org.